The reference framework of Positive Energy Districts (PED)/ Positive Energy Neighbourhoods (PEN) is defined in White Paper on PED Reference Framework as energy-efficient and energy-flexible urban areas or groups of connected buildings which produce net zero greenhouse gas emissions and actively manage an annual local or regional surplus production of renewable energy.  They require integration of different systems and infrastructures and interaction between buildings, the users and the regional energy, mobility and ICT systems, while securing the energy supply and a good life for all in line with social, economic and environmental sustainability.

The SET-Plan, adopted by the European Union in 2008 and revised in 2015, is a first step to establish an energy technology policy for Europe, with a goal of accelerating knowledge development, technology transfer and up-take in order to achieve Energy and Climate Change goals. The SET Plan focuses on 10 key actions fields, of which action 3.2 on “Smart Cities and Communities” aims to support the planning, deployment and replication of 100 Positive Energy Districts by 2025 for sustainable urbanisation. Such PED/PENs could be new developments, but should also implement ambitious solutions for urban district renewal.

There are already number of PED-releated developments within EU. A comprehensive summary of real examples of PED related projects was made by JPI in 2020. Within INTERACT project best practices from existing PED/PEN projects in selected countries will be integrated and needs from all stakeholders within the grid respected.

In November 2016, the European Commission proposed to define Local Energy Communities as “an association, a cooperative, a partnership, a non-profit organisation or other legal entity which is effectively controlled by local shareholders or members, generally value rather than profit-driven, involved in distributed generation and in performing activities of a distribution system operator, supplier or aggregator at local level, including across borders”. However, the terms “local shareholder”, “local member”, and “local level” remained undefined.

Almost one year later, in September 2017, the Council of the European Union changed the proposal of the European Commission by defining Energy Communities as “a legal entity which is effectively controlled by shareholders or members who are natural persons, local authorities, including municipalities, or small and micro enterprises. At least 51% of the shareholders or members with voting rights of the entity are natural persons. Energy communities can be engaged in electricity generation, distribution and supply, self-consumption, aggregation, storage or energy efficiency services, generation of renewable electricity or provide other service to its shareholders or members”. This definition defuses the geographical limitation of the Local Energy Community by allowing non-local natural persons and small and micro enterprises to participate in the Energy Community.

a. is based on voluntary and open participation and is effectively controlled by members or shareholders that are natural persons, local authorities, including municipalities, or small enterprises;

b. has for its primary purpose to provide environmental, economic or social community benefits to its members or shareholders or to the local areas where it operates rather than to generate financial profits; and

c. may engage in generation, including from renewable sources, distribution, supply, consumption, aggregation, energy storage, energy efficiency services or charging services for electric vehicles or provide other energy services to its members or shareholders”.

This definition is included in the final Directive (EU) 2019/944, which is currently in force.

a. which, in accordance with the applicable national law, is based on open and voluntary participation, is autonomous, and is effectively controlled by members or shareholders that are located in the proximity of the renewable energy projects that are owned and developed by that legal entity;

b. the shareholders or members of which are natural persons, SMEs or local authorities (including municipalities); and

c. the primary purpose of which is to provide environmental, economic or social community benefits to its shareholders or members or for the local areas where it operates, rather than financial profits.”

Participation in both types of energy communities is generally open and voluntary, while their purpose is to provide social, economic and environmental benefits to the community members or shareholders rather than profits. Typical community activities include supply, generation, storage, distribution, consumption, sharing, and energy-related services.

Renewable Energy Communities are geographically limited and organised in the proximity of renewable energy projects owned and developed by that community. Natural persons, including low-income and vulnerable households, local authorities and small- and medium-sized enterprises (SME) may participate. RECs cover a broad range of activities referring to all forms of renewable energy in the electricity and heating sector. They are effectively controlled by SMEs while remaining autonomous from individual members and other traditional market actors who participate in the community as members or shareholders.

Citizen Energy Communities mainly differ from the renewable ones by their geographically unlimited character, their focus on the electricity sector, and their technology neutrality. Any actor may participate as long as members or shareholders engaged in large-scale commercial activity and for which the energy sector constitutes a primary area of economic activity do not exercise any decision-making power.

LINK – based holistic architecture
Why is a holistic view indispensable?

The main driver for the Smart Grid development is environmental protection through the decarbonization of all economic sectors.  This goal leads to a significant increase in renewable energy resources. Having various sizes, they are connected throughout the grid at different voltage levels, thus radically changing the electricity production structure. Because of these changes, the traditional power system architecture can no longer meet the new requirements. Other, novel holistic architectures emerge that reliably meet the Smart Grid’s era needs.

The electric power system is a physical entity that includes various appliances owned and operated by different stakeholders. Each control action always impacts the behaviour of the whole system. Control schemes that do not rely on a holistic approach consider the perspective of individual stakeholders (TSOs, DSOs, and customers) and optimize individual functionalities, thus leading to suboptimal solutions from the global view. The holistic architecture enables the efficient and secure operation of the system as a whole.

What is holistic architecture?

The holistic architecture unifies all interactions within the power system itself, between the network-, generation- and storage-operators, consumers and prosumers, and the market, thus creating the possibility to harmonize them without compromising data privacy and cybersecurity. It facilitates all processes necessary for a reliable, economical, and environmentally friendly operation of smart power systems. It allows a clear description of the relationships between different actors and creates conditions to go through the transition phase without causing problems.

More information on this topic can be found in White Paper on Holistic Architectures for Future Power Systems released by the ETIP SNET Working Group on Reliable, economic and efficient smart grid system in 2020.

LINK – the paradigm of Smart Grids

By definition, the LINK-paradigm is a set of one or more electrical appliances (ElA), i.e., a grid part, storage device or a producer device, the control schema and the interface.

The LINK-Paradigm is used as an instrument to design the LINK-based holistic architecture and the LINK-Solution . It facilitates modelling the entire power system from high to low voltage levels, including customer plants. It enables the description of all power system operation processes such as load-generation balance, voltage assessment, dynamic security, price- and emergency-driven demand response, etc.

The LINK-paradigm is the fundament of the holistic, technical and market-related model of smart power systems with large distributed energy resource (DER) shares. The holistic technical model (the “Energy Supply Chain Net”) illustrates the Links’ compositions and their relative position in space, both horizontally and vertically. The interconnected high voltage grids (HVG) are situated on the horizontal axis. They are owned and operated by transmission system operators (TSO). The medium and low voltage grids (MVG and LVG, respectively) and the customer plant grids (CPG) are situated on the vertical axis. The medium and low voltage grids are actually owned and operated by distribution system operators (DSO), while CPGs are operated by customers. 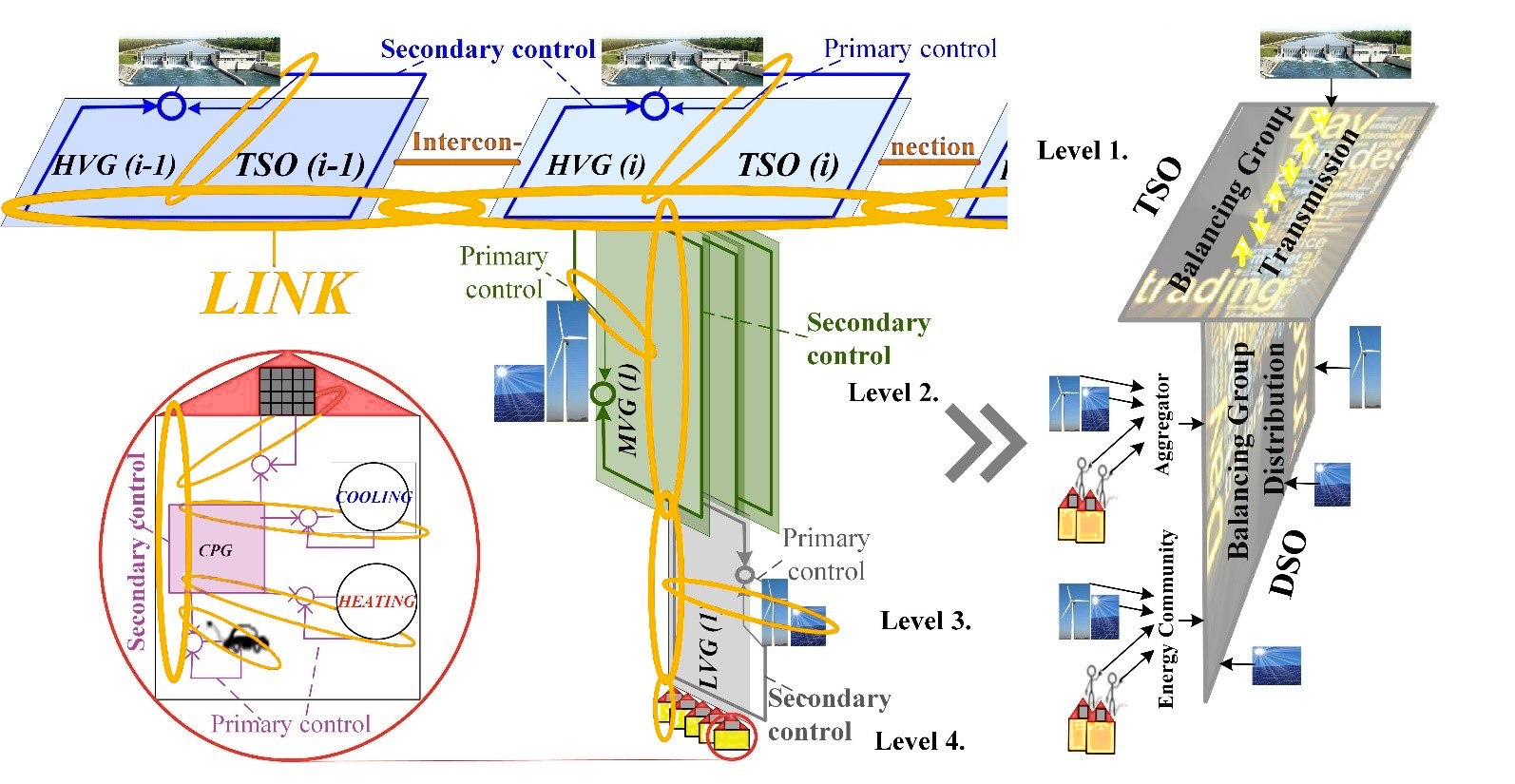 By definition, an “Energy Supply Chain Net” is a set of automated power grids intended for chain links (abbreviated as Links), which fit into one another to establish a flexible and reliable electrical connection. Each individual Link or Link bundle operates autonomously and has contractual arrangements with other relevant boundary Links or Link bundles.

The holistic model associated with the energy market is derived from the holistic technical model. The whole energy market consists of coupled market areas (balancing groups) at the horizontal and vertical axes. TSOs operate on the horizontal axis of the holistic market model, while DSOs operate on the vertical. Based on this model, not only TSOs but also DSOs will communicate directly with the whole market to ensure a congestion-free distribution grid operation and to take over the task of load-production balance. The owner of the distributed energy resources and the prosumers (producers and consumers of electricity) may participate directly in the market or via aggregators or local energy communities. The creation of the local retail markets attracts the demand response bids and stimulates investment in the LEC areas.

The LINK-based holistic architecture merges all relevant components of the power system into one single structure. All Links communicate with each other through technical interfaces “T” and with the market through market interfaces “M”, ensuring data privacy and cybersecurity. Customer plants are too small to participate in the market directly, so they participate through an aggregator or energy community. 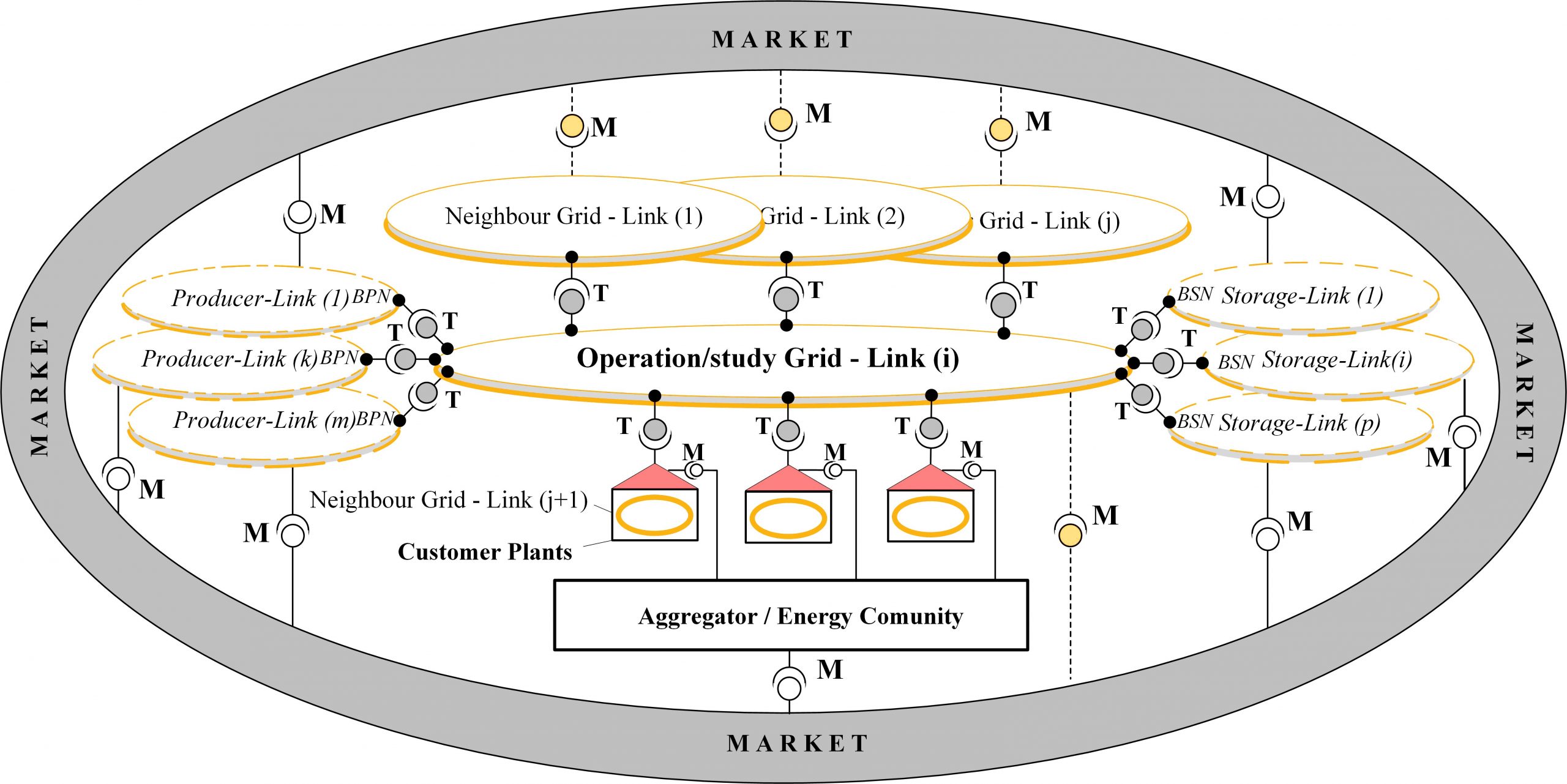 The different levels of the LINK architecture, i.e., technical/functional, generalized, and holistic, are described in this video.

Another video explains how the LINK-Solution provides new strategies to control the voltage in low voltage grids with many photovoltaic systems.

The LINK-based holistic architecture supports the cross-vector and end-user sector coupling through the Storage-Link.

All market actors, including customers joining energy communities, participate in the market in a non-discriminatory way. Each market actor – i.e. simple consumers, prosumers, operators of distributed energy resources, and service providers – may choose to participate in the market directly, through an aggregator, or through the energy community. All grid operators, both transmission and distribution system operators, coordinate the market to guarantee the power system’s reliable and secure functioning.

The LINK-based holistic architecture supports the price-driven demand response process, which is of utmost importance for energy communities. Here is a short video with further explanation. 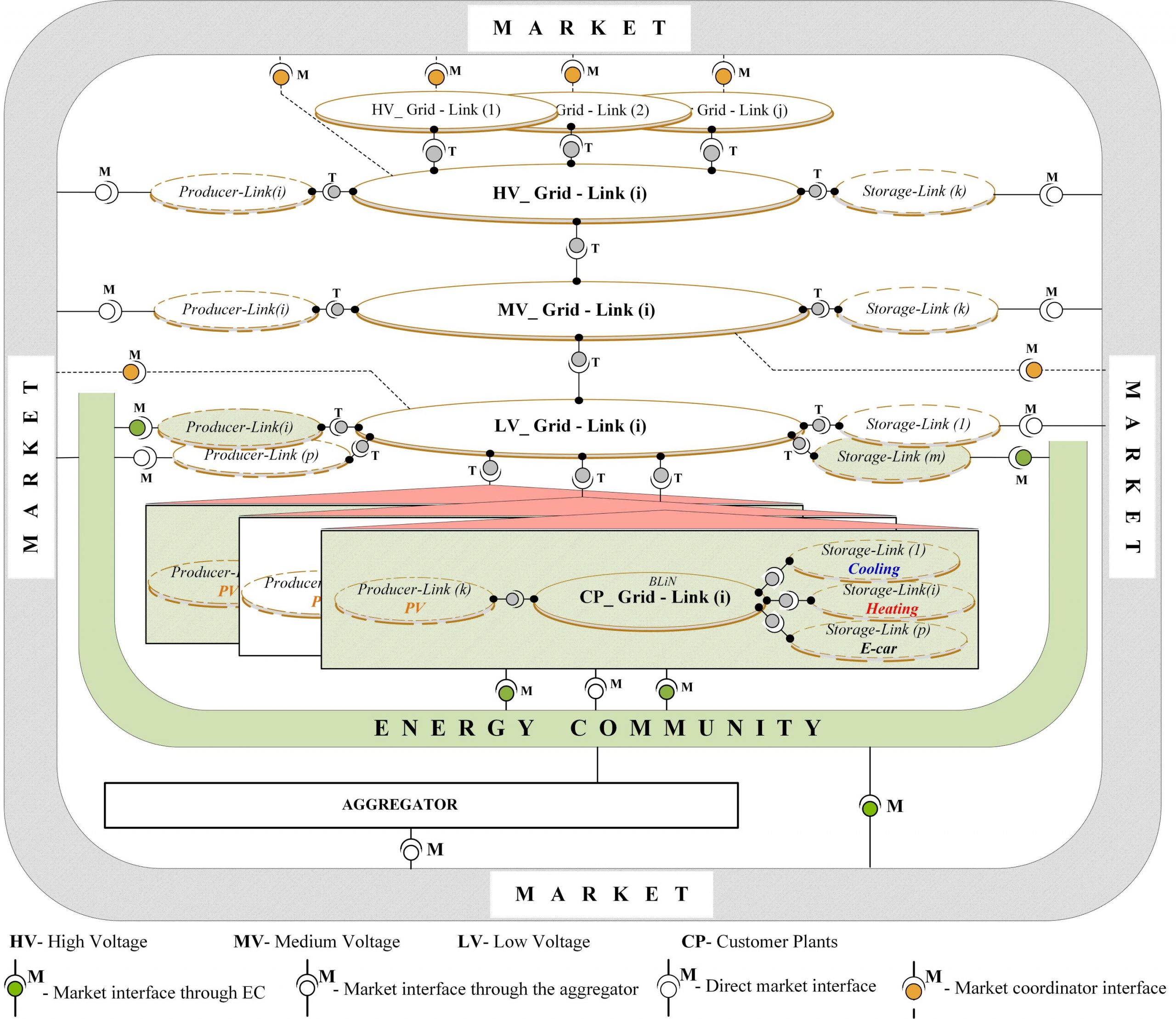 Energy communities can offer more services to its members and to its environment the better they are integrated into the surrounding systems.

The role and functioning of Energy Communities within the European energy market will gradually find its main and complementary business cases.

In INTERACT project, we have outlined the possible business cases of Energy Communities on their transition from basic towards fully integrated operation within the power grid and energy market.

Physical laws are not changeable, any solution must consider them. Holistic system architecture ensures a standardized structure across all network levels and customer installations and enables their seamlessly coordinated integration and operation. The technical solution can mitigate the challenges of implementing distributed energy resources.

In the INTERACT project we have described the key features the Fully Integrated Energy Community should have:

To implement Fully Integrated Energy Communities based on the holistic LINK infrastructure, these changes of entire energy market structure are suggested:

This project has received funding in the framework of the PED Programme, which is implemented by the Joint Programming Initiative Urban Europe and SET Plan Action 3.2. The project is supported by the Austrian Ministry of Climate Action, Environment, Energy, Mobility, Innovation, and Technology (BMK), Technology Agency of the Czech Republic (TAČR) and Viable cities, a research program funded by the Swedish energy agency, Formas and Vinnova. 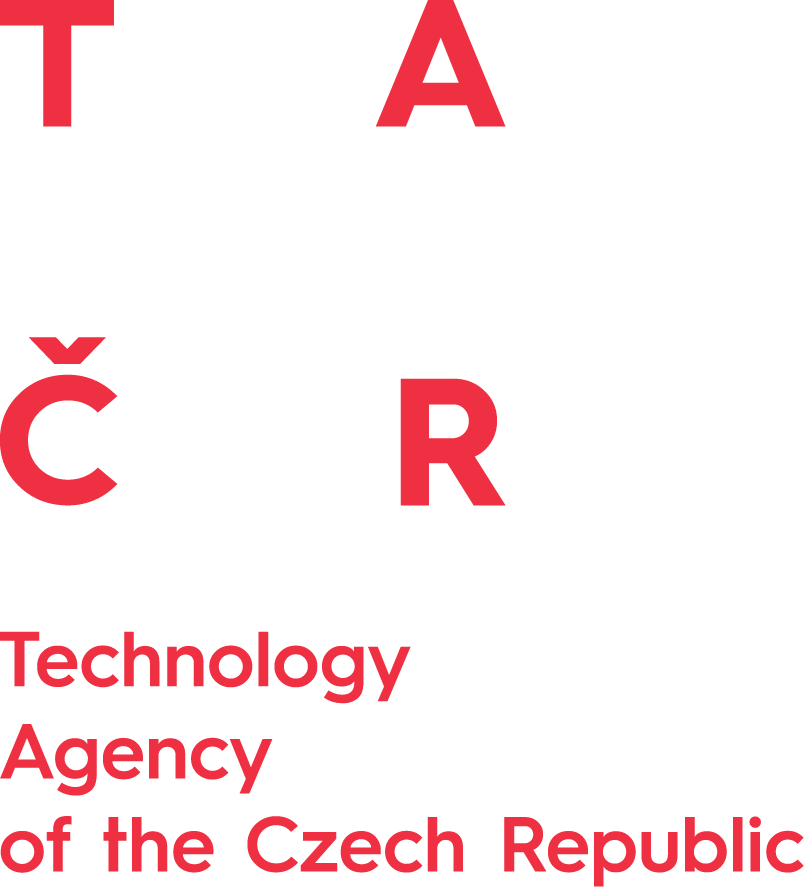 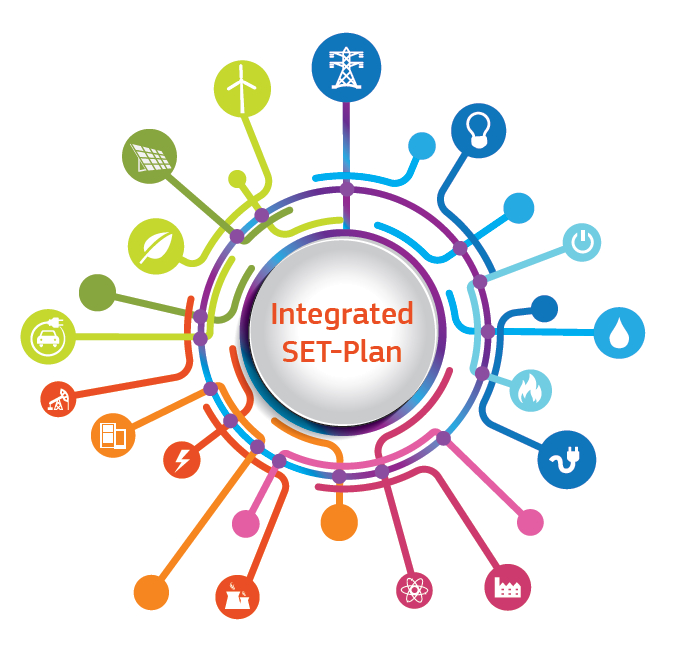